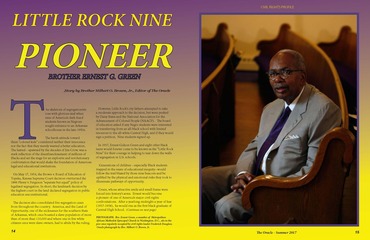 The skeletons of segregationists rose with glorious zeal when nine of America’s dark-hued students known as Negroes sought entrance to an Arkansas schoolhouse in the late-1950s.

The harsh attitude toward them ‘‘colored kids’’ considered neither their innocence nor the fact that they merely wanted a better education. The hatred—spawned by the decades of Jim Crow, was a stark reflection of the disenfranchisement of millions of blacks and set the stage for an explosive and revolutionary confrontation that would shake the foundation of American legal and educational institutions.

On May 17, 1954, the Brown v. Board of Education of Topeka, Kansas Supreme Court decision overturned the 1896 Plessy v. Ferguson “separate but equal” policy of legalized segregation. In short, the landmark decision by the highest court in the land declared segregation in public education unconstitutional.

The decision also consolidated five segregation cases from throughout the country.  America, and the Land of Opportunity, one of the nicknames for the southern State of Arkansas, which once boasted a slave population of more than 110,000 and where one in five white citizens once were slave owners, had to abide by the ruling.

However, Little Rock’s city fathers attempted to take a moderate approach to the decision but were pushed by Daisy Bates and the National Association for the Advancement of Colored People (NAACP).   The board of education asked if any Negro students were interested in transferring from an all-black school with limited resources to the all-white Central High and if they would sign a petition.  Nine students signed up.

In 1957, Ernest Gideon Green and eight other black teens would forever come to be known as the “Little Rock Nine” for their courage in helping to tear down the walls of segregation in U.S. schools.

Generations of children—especially black students trapped in the snare of educational inequity--would follow the trail blazed by those nine beacons and be uplifted by the physical and emotional risks they took to illuminate pathways of opportunity.

Green, whose attractive smile and small frame were forced into history’s arms. Ernest would become a pioneer of one of America’s major civil rights confrontations.  After yearlong midnight—a year of fear (1957-1958), he would rise as the first black graduate of Central High School.  Decades later, in 1999, Arkansas native President Bill Clinton presented Green and the other “Little Rock Nine” members with the Congressional Gold Medal.

And when the school bell rings this fall, it will mark the 60th anniversary of the historic moment in U.S. history when ‘’separate but equal’’ education was banned.

In a recent interview, the soft-spoken, Green, now 75, reflected on his experience as one of the “Little Rock Nine” and the challenges of growing up in Little Rock, the capital city of Arkansas on the Arkansas River.  Against the picturesque backdrop of a street lined with apple blossoms, Green said the ugliness of the city remains just beneath the surface.  “If you scratched Little Rock deep enough—racism comes out.”

Green hailed from the central district and skipped a grade in school. “If you came to the first grade, and you could read, they bounced you on to the next grade,” Green said.

His mother was a schoolteacher, and his father a janitor at the post office.  Green was the oldest of three children but had to become a man faster than he would have wanted when at 13, his father died.  Because of his mother’s limited teaching income, Green took a job during the summer to help support the family. “I worked at a Jewish country club because, in Little Rock, the other country clubs wouldn’t accept anybody that wasn’t a white Christian,’’ he said. ‘’I handed out towels, mopped the floor, and kept the place reasonably clean.”

A socially conscious student, Green said he was aware of the racial storm brewing across the nation.

“I remember the picture vividly in ‘Jet Magazine’ of Emmett Till laying in a coffin; Jackie Robinson breaking into baseball, and the Montgomery Bus Boycott were all indications of what was going on and how black people were at the forefront of some of those changes,” commented Green.

“Being an Eagle Scout helped me to navigate and realize the importance of what we were doing once we finally got into Central,’’ said Green, who was an incoming member of Central’s senior class. ‘’It also gave me some perspective of how we [the Little Rock Nine students] were viewed and our importance in terms of history.”

The harsh climate of Little Rock in the fall of 1957 served as a catalyst in the Supreme Court’s Brown v. Board of Education desegregation order. That tension was palpable at Central during Green’s senior year, which he said was very intimidating. “We would walk through the crowd as the troops guarded us,’’ he said. ‘’People would be hollering using every use of the N-word they could figure out.  The Arkansas governor [Orval Faubus] put in the National Guard to keep us out, then they used the local police who couldn’t keep the mob in order. Finally, Eisenhower sent the troops in.”

After two weeks of being unable to attend classes at Central High, President Dwight D. Eisenhower ordered the U.S. Army’s 101st Airborne Division to escort the “Little Rock Nine,” into the school. The 34th president was the former supreme commander of the Allied Forces in Europe during World War II and a five-star Army general.

However, during the Little Rock crisis, Gov. Faubus ignored the Supreme Court’s ruling--and Eisenhower’s orders.  Eisenhower was a conservative and a reluctant supporter of civil rights but became the first president since Reconstruction to use federal troops in support of civil rights. He also later signed the Civil Rights Act of 1957.

At Central High, the ‘’Little Rock Nine’’ faced challenges that would test their resolve.

“It was inside the school when we were really harassed,’’ Green said. ‘’They would throw steamed wet towels our way, and at night we would get threatening phone calls. One of the conditions that were imposed on us was that we couldn’t do any extracurricular activities which meant no sports or club memberships.”

Bates, president of the Arkansas NAACP, and her husband owned the black weekly newspaper, the Arkansas State Press. ‘’Daisy was a tough lady, and she was willing to use the pen, as well as her connections around the state,’’ Green said. ‘’She was very helpful in getting us through that year.”

She also was a general in the struggle and the NAACP her army. Its foot soldiers included attorneys Thurgood Marshall and Wiley Branton.  In 1958, Green became the first black student to receive a diploma from Central High School.  Dr. Martin Luther King Jr. wanted to witness Green’s graduation that night as he sat with the Green family.

Green fondly remembered Bates and King visiting his home after the ceremony. “As the family set the table with fried chicken, corn on the cob, lemonade and sweet potato pie, Martin Luther King Jr., expressed how proud he was that I had completed the year,’’ Green said. ‘’Dr. King and I didn’t talk too long because I was trying to get out with my buddies and celebrate.”

After graduating, Green was awarded a scholarship to Michigan State University from an anonymous donor. Years later, he discovered the donor was John A. Hannah, president of the university. Hannah was the first chairman of the Civil Rights Commission under the Eisenhower administration. “I guess he thought that this was something he could do and I’m grateful that he did,’’ Green said. ‘’Funny thing, in my role as a student leader, I picketed Hannah’s home many times during the height of the early 1960s Civil Rights movement,” Green said, with a laugh.

Green’s activism at Michigan State increased as he served as the NAACP campus president and a member of the student government. “We were in support of the students in the South, the lunch counter sit-ins and voter registration.  The City of East Lansing [Michigan] had a restriction on selling homes to black folks, so we picketed in East Lansing as well,” Green said.

He added to his leadership portfolio when he decided to join Omega Psi Phi Fraternity. In 1961, Ernest with five other young Black men were founding members of Omega Psi Phi’s Sigma Chapter at Michigan State.  “I saw Omega has a way to expose to the university that there were solid African American males that could make a contribution,’’ Green said.

After graduation from Michigan State University with a bachelor’s in social science and a master’s in sociology, Green began his professional career. His first job was working for the A. Phillip Randolph Education Fund in New York City. His boss was Bayard Rustin, a key organizer of the 1963 March on Washington.

Green said Rustin “was a great person to work with.  We were preparing young brothers for the building trades as electricians, plumbers, and steamfitters. My job was to help place applicants in an apprenticeship program and get their union cards.”

After his job with Rustin, Green was appointed an assistant secretary of labor by President Jimmy Carter. Later, Green became a managing director at Lehman Brothers Holdings Inc.  “It was my relationships that I established with job training programs that allowed me to have a client base on the municipal and public finance side,” Green said.

In many ways, Green’s life has come full circle, from hurtling educational barriers in Little Rock to later attending meetings at the White House.

Green was pressed into becoming a pioneer at an early age.

But, “we [Little Rock Nine students] recognized the importance of being at Central, and the manner in which folks tried to keep us out underscored how important this was for us as black students,’’ he said.  ‘’They worked so hard to keep us away [that] it confirmed to me that we were doing the right thing.”

On the grounds of the State Capitol in Little Rock, a plaque inscription mirrors Green’s sentiments about his experiences. “We wanted to widen options for ourselves, and later for our children.”