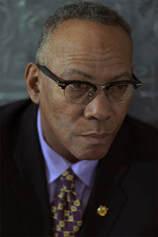 Dr. Milbert O. Brown, Jr.  is a remarkable storyteller. During his four-decade career, he has captured the historical and cultural tapestry of communities and people using his gifts as an artist, photojournalist, and writer. Brown has combined his talents in producing independent educational and creative projects as the principal consultant of Brown Media Consulting.

Some of Dr. Brown's consulting responsibilities include serving as the International Editor of The Oracle Magazine, the official membership publication for Omega Psi Phi Fraternity, Inc. Brown manages the Oracle’s editorial content and edits stories and pictures from members worldwide. Many of Brown's creative projects include using his photography and writing to highlight past and or current Black issues.

Earlier in Brown’s distinguished career, he worked as a photojournalist and picture editor at two of the nation's top newspapers, the Boston Globe and Chicago Tribune. At the Tribune, Brown shared journalism's highest honor-- the Pulitzer Prize in Journalism for Explanatory Reporting as a contributing staff member in 2001.
​
During his month-long coverage in South Africa, Brown was a member of the Foreign Correspondents Association. He gained international reporting experience covering the country’s first free election and the presidential inauguration of Nelson Mandela. Later, he was one of six U.S. journalists selected by a special United Nations committee to cover Liberia's elections as a 2005 United Nations Overseas Reporting Fellow.

The Indiana native graduated from Morgan State University with a Doctorate in Higher Education Leadership. Dr. Brown also earned a Master of Arts degree from Ohio University’s School of Visual Communication and a B.S. in Journalism from Ball State University.